Our mission is to preserve medical freedom.

Freedom Keepers come from all walks of life. We are a united network of individuals who share in the fundamental truth that medical freedom is a human right. 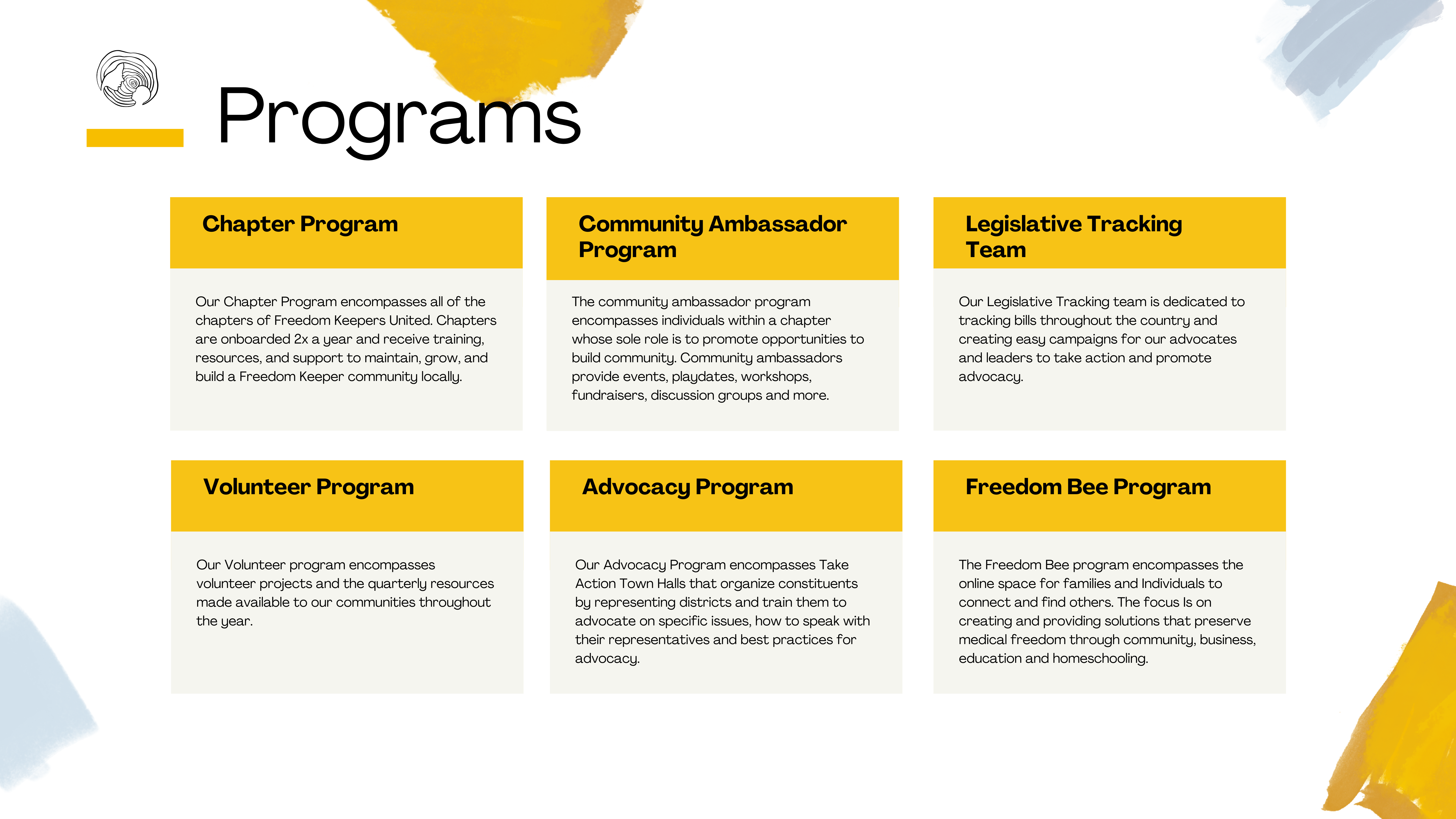 We take ownership of the work and content we create and aim to be transparent in our actions.

We provide a safe place for individuals to share their stories, ask questions, and feel heard.

We pursue a growth mindset and thoughtfully engage with those who have diverse backgrounds and perspectives. 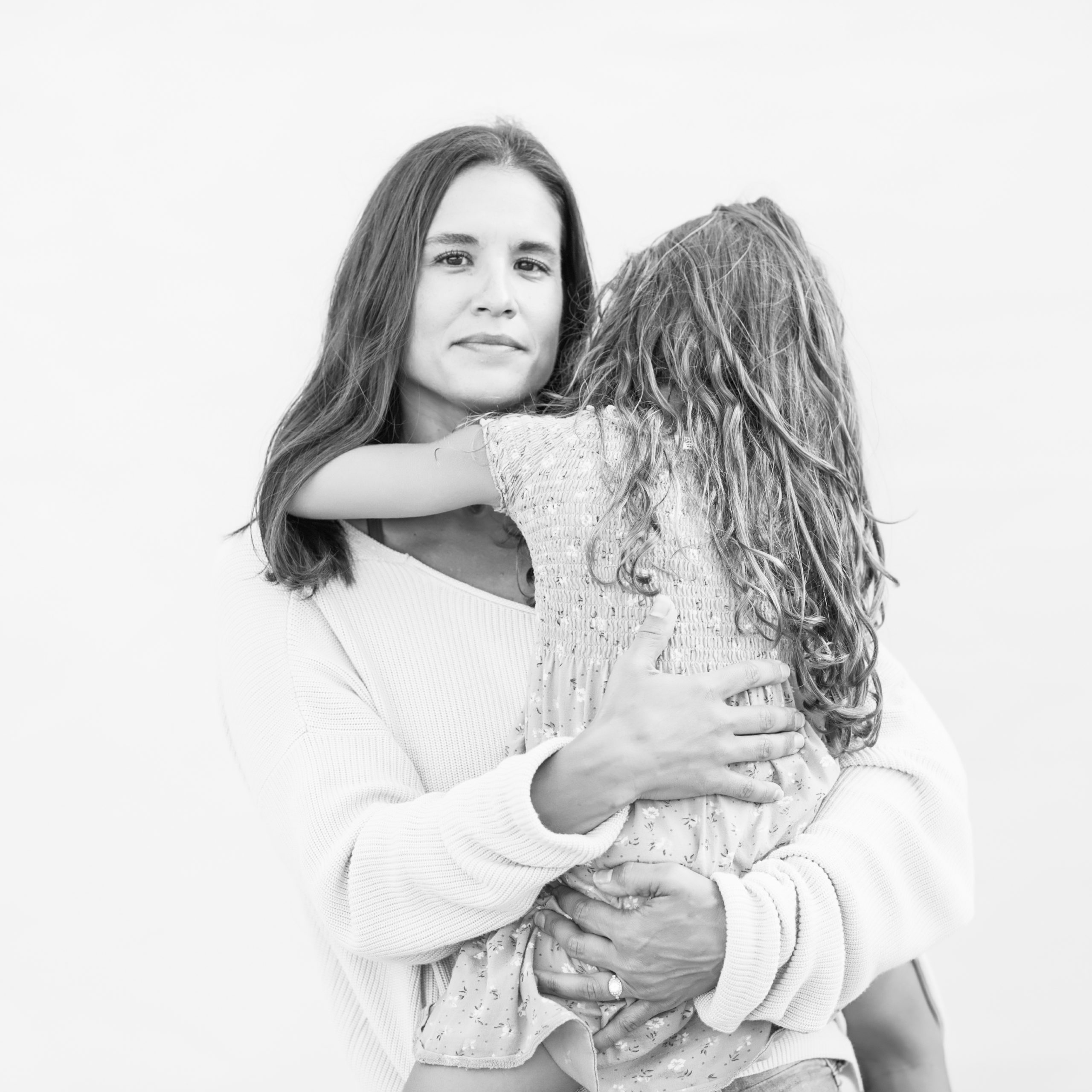 Get Involved
Support Our Work

Founded by five women, Freedom Keepers United was established in September of 2019. After California’s Senate Bill SB276 passed, the founding members were determined to unite individuals from all over the world to create a nonprofit focused on protecting medical freedom.

With California historically among the states with the strictest mandates, citizens across the United States watched as lawmakers removed the last remaining exemption. Quickly, our nation realized that this troubling trajectory would continue to extend to other states and countries.

Within one year, Freedom Keepers United quickly grew to over 40 U.S. National Chapters and more than 14 different International Chapters. This rapid growth demonstrates the effect individuals can have by using their voices and their platforms to enact change.

When you sign up for our mailing list, you will be sent our newsletter, updates, and information on how to get involved in your specific area. We can’t wait to hear from you!

We are so thankful for you!

From the Freedom Keeper Family to yours, we hope you have a wonderful weekend with friends and family.

ACIP has moved it's temporary recommendation of CV-19 vaccines to the permanent recommended immunization schedule of 2023.

The CDC will set the official immunization schedule by February 2023 based on ACIP recommendations. While states have already begun introducing mandates for CV-19 throughout the country, this official recommendation will further enhance efforts by state policy makers.

We have one question ▪️

Has the childhood vaccine schedule ever been tested in its entirety?

Link to watch in bio!

This morning ACIP proposed to move their temporary recommendation of CV-19 vaccines for children to the permanent CDC recommended immunization schedule of 2023.

While states have already begun attempting to introduce CV-19 mandates without this official recommendation, this will further enhance efforts by state policy makers to continue mandate efforts.

Other changes to the immunization schedule such as adding additional brands of MMR, PCV and others have also been proposed.

Visit the link in bio to watch the vote. ...

👍🏼Share this post to help set the record straight + set a reminder to tune in tomorrow morning at 5:30am PST/8:30am EST.

*Freedom Keepers understands the importance of taking action and providing accurate information. We do not condone the use of scare tactics or disinformation to elicit action within our community.*

Earlier this year in June, ACIP voted to make 2 recommendations on the Moderna CV-19 vaccines for ages 6 to 11 years and 12 to 17 with a Pfizer recommendation voted on even earlier, following the FDA’s Emergency Use Authorization on it. The CDC has already had recommendations for them listed on their website.

Today’s vote (10/19) was to add CV-19 vaccines to the Vaccines for Children (VCF) program, which distributes the vaccines to VCF policy holders such as MediCal and MediCare for families and individuals utilizing government assistance. ACIP unanimously voted to include CV-19 vaccines in the VCF program.

To review past votes, meetings, and presentation slides of previous meetings visit:

“Purpose: The committee is charged with advising the Director, CDC, on the use of immunizing agents. In addition, under 42 U.S.C. 1396s, the committee is mandated to establish and periodically review and, as appropriate, revise the list of vaccines for administration to vaccine-eligible children through the Vaccines for Children (VFC) program, along with schedules regarding dosing interval, dosage, and contraindications to administration of vaccines. Further, under provisions of the Affordable Care Act, section 2713 of the Public Health Service Act, immunization recommendations of the ACIP that have been approved by the CDC Director and appear on CDC immunization schedules must be covered by applicable health plans.

Important Announcement tomorrow at 10am. Tune tune in @freedomkeepersunited for this important LlVE! ...

The DAPTACEL Insert (approved in 2002 by the FDA for children 6 weeks - 6 years) states the following as Adverse Reactions based on severity, frequency of reporting, or strength of evidence for a causal relationship to DAPTACEL.

Have you or your child experienced any adverse reactions post DTAP Vaccination?

“I have worked in the public school system as a school psychologist for 20 years. While every year presents different obstacles, nothing has compared to the challenges of the past 3 years. When schools were forced to shut down in March of 2020, due to Covid-19 restrictions, educators were given the task of completely reconfiguring the way we do our jobs. As a school psychologist, a main portion of my work is conducting one on one assessments with students. With no in-person access to my students, this was impossible. When schools reopened, there were many precautions in place: masks on staff and students, plexiglass barriers, social distancing, and modified school days (shortened day), and mandatory weekly testing for any unvaccinated staff. Being only one of three unvaccinated staff members at my school site, I was required to submit proof of a negative Covid test to the principal on a weekly basis. Giving my personal medical information to the school principal felt like a breach of my privacy. However, it was either to comply with the weekly testing, or risk my employment. I have reluctantly chosen to submit my negative test results on a weekly basis in order to maintain my position.” - Elizabeth F, M.S. California

So many 'A'mazing responses for the letter "A" of our ABC of Medical Freedom!

Today we continue with the letter "B" and we want to hear from you! Here at Freedom Keepers, we believe "B" is for Bodily Autonomy.

Your turn! Drop your "B" words for Medical Freedom in the comments. ...

Want to stay up to date with the latest?

Subscribe to our newsletter today for news, updates, calls to action, and opportunities to connect to other Freedom Keepers worldwide!

Currently, the CDC Advisory Committee on Immunization Practices' (ACIP) recommends the Pfizer’s CV-19 booster for anyone 12 and older, while Moderna’s booster is recommended for people 18 and older.

What do we know about the new CV-19 Booster?

▶️Currently, Less than 2% of eligible people have gotten updated CV-19 booster shots, 3 weeks into the rollout.

▶️According to documents on the CDC website, human tests of Moderna's version of the new booster are still "ongoing." At the time of the rollout. Right now, there is only final evidence from  "8-10 mice" per group."

▶️The FDA's website shows for Pfizer the agency also relayed on the final study evidence from "8 mice." But human trials are also ongoing.

▶️So far, the new boosters "showed a similar local reaction and systemic event profile." That means side effects appear to be about the same including "mild to moderate injection site pain, fatigue, and muscle pain."

▶️FDA Commissioner Dr. Robert Califf said the decision is based on "the totality of the evidence" from previous COVID vaccine trials.

We are preparing to open our bi annual Chapter Leader Onboarding.

This is a great opportunity if you’ve thought about getting involved as a State Admin/ State Chapter Leader.

▶️Tag someone who would be a great Freedom Keepers United State Leader below 👇🏼 ...

Join us for a Special Live with @conscious_family_project on Wednesday September 28th at 11:45am PST.

Learn about Ally’s advocacy as the Host of Conscious Family Project Podcast and Education Consultant.

“…The importance of parents being in the driver seat of every part of their families life, especially with homeschooling. You are your child's best teacher and advocate.” - @conscious_family_project

CV-19 Updates from around the world.

Denmark: Denmark is currently not offering booster shots to those under 50.

Mexico: COVAX offers Mexico 10 million CV shots for kids after after the country's president vowed to complain to the U.N. over delays.

The UK: Children under 5 are not yet eligible for CV

The US: Health Officials are urging Americans to get the Flu Shot and the CV Booster at the same time.

Freedom Keepers Network is coming soon! Sign up to be the first ones invited! A place to connect with Freedom Keepers near and far, this will be our social platform to meet other likeminded individuals to homeschool with, work with, build businesses, groups, and friendships with that preserve medical freedom together!

Our Homeschoolers United Network has already brought together hundreds of Freedom Keepers Worldwide!

👇🏽Tag someone in the comments who needs to fill out this survey!

Hey Freedom Keepers! Within the next few weeks we want to do something fun! We want to fill the alphabet of Medical Freedom.

We want to hear from you, so let’s start with the letter A!

Here at Freedom Keepers, we’re starting with A for all.

All > Medical Freedom of All families.

Your turn! Drop your A words for Medical Freedom in the comments👇🏼 ...

America, California needs your help. California’s Governor, career politician, Gavin Newsom, has been propped up and publicized as a potential 2024 presidential candidate. While he denies any intention of running for President, it is up to us to make clear what we would want from a leader.

With 6 bad bills on his desk that will further divide the state of California if enacted, our country is watching to see if he will make the right choices in protecting our children and our rights.

Tell Governor Newsom which state you come from and why he must veto these 6 bad bills today.

Hey Freedom Keepers! We are SO excited to share with you what our Merch Team has been working on!

You can now represent your State Chapter, Freedom Keeper Style! Advocate in your new favorite T-shirt or Sweater by shopping our collection! Visit
shopfreedomkeepers.org or visit the link in our bio.

If you are interested in joining our Merch Team, visit freedomkeepersunited.org/volunteer. ...

Tune in to learn how our Military Chapter has been actively advocating for the Men and Women of our Armed Forces. ...

There has been a problem with your Instagram Feed.